Twin Isles Enveloped in Palisades of Coral and Mermaid Tales... 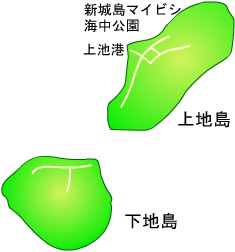 Aragusuku is located 4 km north of Kuroshima and composed of Kamiji and Shimoji islands, collectively called “Panari” among the locals.  At low tide, the water between the two islands become shallow enough to walk.  The main residential community of natives is on kamiji Island, while Shimoji is exclusively run by cattle ranchers who purchased the island after the last of its original inhabitants emigrated to Kamiji.

At one time, Aragusuku's population was as high as seven-hundred, and at that peak the locals notably produced Panari -yaki, an earthenware made form the local red soil mixed with crashed seashells.  At the time, dugongs—known as Zanu in the local tongue—inhabited the waters around the island.  Unfortunately, the population was slowly wiped out due to demands for“mermaid flesh" as tribute to the Ryukyuan government in Shuri.  However , on Kamiji , there is a hidden grove maintained for the enshrinement of the dugong to this day.

The water around Panari are also notewothy for their unparalleled clarity, allowing visitors to the island to see the pristine blue depths and all their living wonders better than those of any other isle.