The municipality is composed of sixteen island of various sizes located in stretch of sea southwest of Ishigaki in the large arc of the Yaeyama Islands. Approxmately, it sits at 45 degrees north latitude, 450 Km southwest of Okinawa.

The town of Taketomi is part of Yaeyama County, the southernmost county in the Ryukyu Archipelago.
Its sixteen island lying southwest of Ishigaki island—nine of which are inhabited, and the other seven of which are not—stretch 42 Km from east to west and 40 Km north to south.
What is unique about its administrative style is that its municipal office is located within the neighboring city of Ishigaki at the center of regional economy. 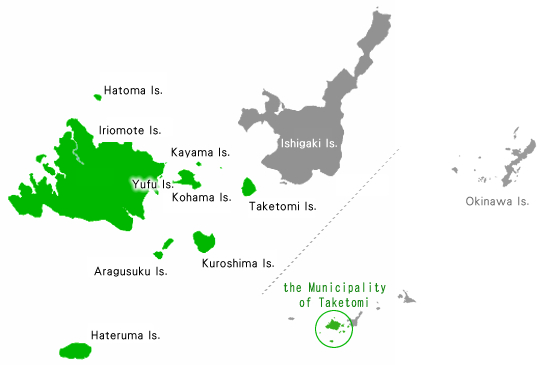 Located in the southern reaches of the East China Sea and surrounded by ocean, the municipality has had anbaverage yearly temperate of 24.0℃ in the previous yearse—experiencing relatively little change in temperature throughout the four seasons—and its average humidity and mean annual precipitation 78.7% and 2,111 mm (83in) characterizing its humid subtropical climate.

Precipitation levels rise particularly in the rainy season in early summer and the typhoon season in late summer (July-September), both of which bring torrential rainfall. However, the island may experience drought in a year of few typhoons.